Summiteers — What do you think about the trend of “political correctness” on campus? Does it stifle free speech? Free-flow of ideas? Is there a value in being confronted with uncomfortable ideas? Would you rather have an argument with someone (whose ideas might be repulsive or insulting)… or would you rather use the power of protest to remove that individual from campus?

We would love to hear your thoughts on this issue.  Please join us on Facebook to post your comments. 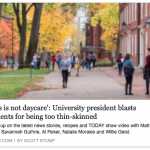 A recent article in USA Today for parents addressed this issue.

“If you’re more interested in playing the ‘hater’ card than you are in confessing your own hate; if you want to arrogantly lecture, rather than humbly learn… if you want to be enabled rather than confronted, there are many universities across the land (in Missouri and elsewhere) that will give you exactly what you want, but Oklahoma Wesleyan isn’t one of them,” he wrote.

This part was particularly interesting:

Piper made it clear that his university is not looking to shield students from topics they may not agree with.  “Oklahoma Wesleyan is not a ‘safe place,’ but rather, a place to learn: to learn that life isn’t about you, but about others…This is a place where you will quickly learn that you need to grow up. This is not a day care. This is a university!”

We would love to hear your thoughts on this issue.  Please join us on Facebook to post your comments

For more reading, also take a look also at this article: https://www.washingtonpost.com/…/obama-says-liberal-colleg…/

— with a quote from Obama on the subject:

“I’ve heard of some college campuses where they don’t want to have a guest speaker who is too conservative, or they don’t want to read a book if it had language that is offensive to African Americans or somehow sends a demeaning signal towards women,” Obama said Monday while speaking at a town hall meeting at North High School in Des Moines. “I’ve got to tell you, I don’t agree with that either — that you when you become students at colleges, you have to be coddled and protected from different points of view. Anybody who comes to speak to you and you disagree with, you should have an argument with them, but you shouldn’t silence them by saying you can’t come because I’m too sensitive to hear what you have to say.” – President Obama

This site uses Akismet to reduce spam. Learn how your comment data is processed.